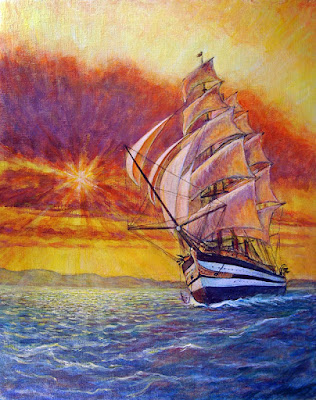 As I am writing this, over five hundred thousand refugees have fled from Ukraine, and

will soon pass the million mark.  Families are being torn apart as they flee, in hopes of

finding safety from the Russian's attacks and bombings. They separate at the borders;

the women and children don't know where they will be going, as the men stay behind to

try and defend their country.   Nearly five hundred men, women and children have

already been killed, in addition to the thousands who have been injured.

their brutal neighbor?  They have planted a tree of democratic freedom, and they have

been enjoying its fruitful rewards.  That has angered Vladimir Putin, who, like a vengeful,

supreme deity, seems determined to eliminate all such subversive knowledge from the

country, before freedom should possibly drift over the border and take root in Russia.

This kind of behavior is par for the course, for a sociopathic, murderous thug like

the ex-KGB agent Putin.  He has enriched himself more than the fabled wealth of royal

Czars, all at the expense of the Russian people, while as he was murdering anyone who

opposed him.  He is always quick to take advantage of those who are weak and

defenseless, and he sticks his knife into any conflict around the globe, anytime he can

profit from other people's tragedies.  He is the reincarnation of Joseph Stalin in every

way, except for the black mustache.

At this point in time, it should be perfectly clear to everyone, that Putin is the true

personification of a thoroughly evil, human being.  However, that does not take into

account Putin's fellow sociopaths, such as Donald Trump, who, as his family has

warned us, is someone who thinks only of himself.  When Putin and Trump had their

summit talks, the photographs showed them smiling at each other like a pair of Mafia,

crime bosses, having a meeting to divide territories.  And now, even in the face of the

fact that Putin is blatantly committing war crimes, and causing the loss of lives and

Wouldn't it be nice if Trump could be trapped in Ukraine right now, with the

encircling army, firing closer to him with every passing minute?  What would he be

saying about his pal Putin then?

The painting was a recent commission which vaguely fit in with today's posting,

all kinds, by any means possible, often by ship, across the oceans, to an unknown

land and an unknown fate.

Eugene P. McNerney
I have been a professional artist and designer for more decades than I care to count. My artwork is represented in collections across America and in Europe, and I still enjoy painting, and I plan to continue as long as I am able......and as long as I have room to keep storing more paintings. That problem of storage brings to mind, one of the motives for the creation of this blog. There is a well known quote by Leonardo Da Vinci, proclaiming that paintings are never finished, they are only abandoned. That is a familial feeling for many artists, myself included. But now, after a half century of growing accumulation, I realize that the time has come for me to have a multitude of abandonings. So I will be offering my artwork in this blog, as I come to it, day by day, the oldest pieces as well as the newest things, fresh off of the easel.